Take also a look to: 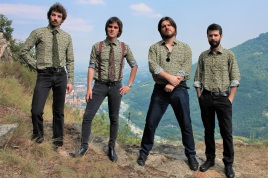 The Selfish Cales were born on 2010, thanks to a lucky meetings on Myspace between Andy and Gabriel. Their passionate idea was to bring a complete music reality, also concern to live performances and visual impact.

The early months give the birth of their first EP, sign of a simple but close-knit alchemy. The first EP consists in 5 tracks distributed in 100 promotional copies, followed by many gigs in northern Italy. The sound was still markedly garage, but with Psychedelic shades and a sixties-oriented identity.

In 2011, The Selfish Cales changed their line up due to the departure of Chris (rhythm guitar), which will bring to the entrance of Albert Cale on Organ, Piano and Mellotron. In this period the second EP “The Selfish Cales II” has been published in 100 copies, with a more mature sound characterized by various influences. Here it states the psychedelic character of the band, and the Indian Sitar takes part in songs and live performances.

Their young way continues through many gigs and a second videoclip from the Single “Useless”, plus a side-project that give the birth to “Dandelion Seeds”, a tribute of five songs from the '60s Psychedelic Pop.

In September 2013, the first LP "Light Worms And Old Dancing Ladies" comes out: the album establishes a transitional phase of the sound of The Cales, between Garage and wider openings to Psychedelia, Progressive and Pop. The album was released digitally on Record Union, plus a hundred copies promotional CD-Digipack copies.

From October 2013, with the departure of Albert (keyboards), starts a period of several changes in the line-up that will find their final resolution one year after, with the participation at the 25th edition of Psych Out Festival: the arrival of Sarah Cale (Bass), Andy's girlfriend, brings a new Power Trio live formula, and the promotion of the second LP.

"Throw Your Watch To The Water" debuts in free download and cd-digipack copies, always with the historical fidelity to DIY philosophy. The feedbacks from the music-zine are positive, and the album marks a further stylistic step: veering into Psychedelic Pop strong echoes, but also with eclectic influences between Soul (Some Warm Trails, Colours Of The Mind) and Indian Sitar (I Believe In Magic, Imaginary Journey). The live activity becomes more selected.

Howewer, in the summer of 2016, some inclement happenings interrupt the project's path: Gabriel Cale, founder and principal mind of the Cales for many years of the project, leave the band due to overtaken professional causes. Furthermore, the departure of Sarah Cale in the following month for sentimental reasons, left Andy Cale the one and only member left.

These events bring Andy to pause the project for many months, waiting to be able to restructure the whole project from the foundation with a new, future line up.

After almost one year of silence, dedicated to the total reboot of the band and the continuation of the work for a third LP,  Andy Cale presents the new Selfish Cales line up in September 2017: Giuseppe Floridia Bass / Choirs), Alberto Rocca (Keyboards / Choirs), Luca Zanon (Drums).

Finally, in October 2018, the third album "Haapsalu" is released, for the first time under a Label: Volcano Records. Curiosly, in the inlay of che CD-Digipack version of the Album you can find both the Studio and Actual Line-up, due to the big line-up changes faced in the previous two years. The album is mixed and mastered by Cales new bassist, Peppe Floridia, in his own studio Floryd Sound Studio.